Principles in this lib

For installation/get-started see the next section.

In a cards.routes which is referenced in routes as

You can write the following swagger spec in comment (This example is in yml, but json is also supported). The comment has to start and end with ###.

If you don't write any comment here the endpoint is still going to be picked up by play-swagger, the parameters will be included but there will not be any response format. This allows newly added endpoints to be automatically included in swagger with some basic information.

Note that everything in the comment is just standard swagger definition, and it $refs to a case class CardCreated, which is defined in a Protocol object, and it references another case class Card. Here is the source code:

This will generate the path with summary, tags, parameters and a response with schema defined, which comes from the comments and case class reflection. It also recursively generates definitions from your case class.
These schemas assumes that you are using a simple Json.format[CardCreated] to generate the json response out of this class. If not, you will have to write the definition yourself in the base swagger spec and reference it here at the endpoint (give it a different name than the full package name though, play-swagger will try to generate definitions for any $ref that starts with the domain package name). 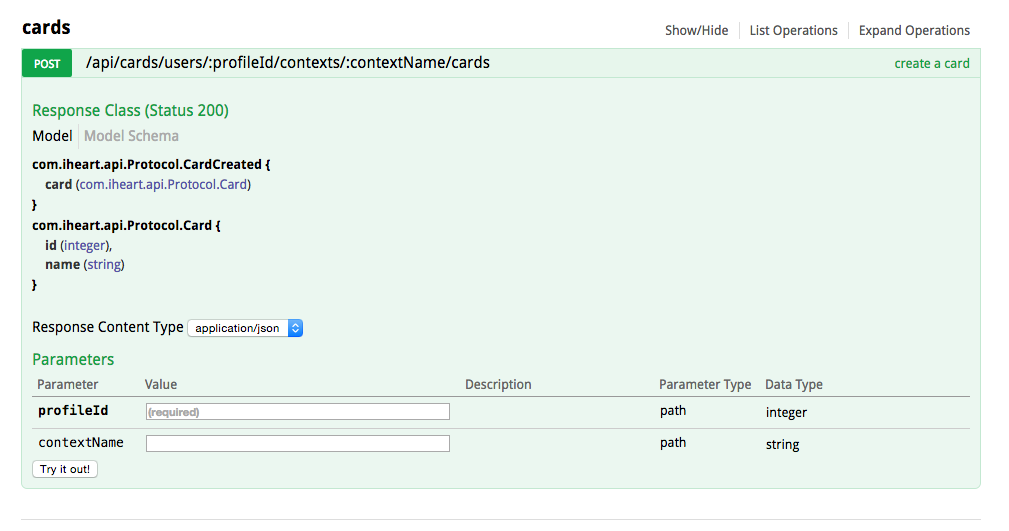 In short you need to create a controller that uses the library to generate the swagger spec and make it available as an endpoint. Then you just need to have a swagger UI instance to consumer that swagger spec.

Play swagger is just a library that generates a swagger spec json for you. You can do anything you want with that json object (e.g. save it to a file), but the most common usage would be serving it in an endpoint in your play app. Here is how: Add a controller to your Play app that serves the swagger spec

add an end point to the routes file

Add a base swagger.yml (or swagger.json) to your resources folder. This one needs to provide all the required fields according to swagger spec E.g.

Deploy a swagger ui and point to the swagger spec end point, or

Alternatively you can use swagger-ui webjar and have you play app serving the swagger ui:

Add the following to your route file

Then you should be able to open the swagger ui at http://localhost:9000/docs/swagger-ui/index.html?url=/docs/swagger.json

If you have any questions/bug reports, please submit an issue on github. With good unit tests coverage, it's pretty easy to add/modify this library as well. Code contribution are more than welcome. Make sure that your code is tested and submit the pull request!

To override any of the automatically generated field, you just need to write the same part in your comment or base swagger spec file.

How to hide an endpoint?

Body content is specified as a special parameter in swagger. So you need to create a parameter in your swagger spec comment as "body", for example

Again, play-swagger will generate the definition for com.iheart.api.Track case class

How do I use a different "host" for different environment?

The library returns play JsObject, you can change however you want like

How to find more examples?